On the 10th anniversary of Hurricane Katrina devastating New Orleans, and coastal Louisiana and Mississippi, I’m reflecting on the old adage that says, “The definition of insanity is doing the same thing over and over, yet expecting different results.”

New Orleans can easily flood from another hurricane. I wrote about that in yesterday’s blog. Experts admit that the new fortified levee system is not high enough to keep tidal surge from topping the levees.

There are three areas where I see the potential for the insanity of prior sins and mistakes to be repeated.

1) The first sin is allowing people in low lying areas, in coastal regions, and in flood planes anywhere in America, to build a house on a foundation that is not elevated above recognized flood levels. Whether in New Orleans or a flood river plane in North Dakota, houses in flood zones should be built on stilts higher than predicted flood waters. Some home owners in New Orleans have started doing this. This is how traditional homes here were constructed here. Some homeowners, strapped for cash, have not raised their homes. It is time for building codes in all coastal towns south of I-10 and I-12 along to change. Many homes in Katrina had no wind damage, but were a complete loss because storm surge overpowered levees, flooding everything. In a nation where all flood insurance comes from the government, as do most of the emergency recovery funds, mitigating flooding with more grants to raise existing houses is a far better financial bet than paying out claims after the fact. Establishing better building codes for new construction in flood zones saves money in the long run for everyone.

2) The second is human denial among citizens and elected officials. Citizens first — A hurricane may kill you. If it doesn’t kill you, it can leave you without creature comforts like food, water and electricity for days, weeks, or months. Failing to heed an evacuation order leads to expensive and complicated rescues. I’ve been a storm chaser and journalist in many natural disasters in which people tell me they don’t plan to evacuate because they’ve stayed for other storms and survived. What I’ve learned covering these storms is that no two are alike. No two hurricanes come from exactly the same direction. No two hurricanes have exactly the same wind speeds. In Hurricane Katrina, for example, while the devastation and flooding was astounding, if the eye of the hurricane had passed only five to ten miles further to the West, the urban flooding up to rooftops would have been doubled. It is costly to evacuate, but it is far more costly for communities when residents fail to heed evacuation orders.

As for human denial among elected officials, then Mayor Ray Nagin of New Orleans is the poster child of human denial. Even when the head of the National Hurricane Center called to tell Nagin that a disaster was eminent, the mayor still waited too long to order evacuations. Evacuations that should have been called 48 hours before the storm were delayed until it was too late to logistically move people. While officials in other communities successfully followed plans and called for timely evacuations, one weak link was pivotal in causing tens of thousands to be trapped by flood waters and leading to hundreds of deaths, mostly by drowning. Those trapped in the flood then led to a massive human rescue effort that costs untold millions of dollars, when it reality there was time and there were resources sufficient enough to most of those people out of harm’s way.

3) The third sin falls in the area of communications. While many communities have emergency and disaster plans in place, they often fail to take the next step of having a crisis communications plan that effectively communicates urgency, peril, and evacuation options to constituents. Pre-written communications documents and properly trained spokespeople are the combination needed to motivate people to leave the their communities until it is safe to return. The proliferation of social media has created new ways to reach people and new ways to gather information about the unfolding crisis, but it also has created more opportunities for rumors and misinformation to spread.

Disasters create living classrooms in which people can learn what was done wrong and what was done right. The goal is to learn so the wrongs are never repeated and so that the rights are done perfectly. 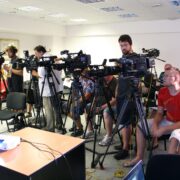 The PIO and the Right to Know: 2nd Annual Communications Summit 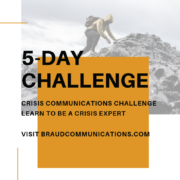 Newton to Media: Please Stay Away on Sandy Hook Anniversary

Citizen Journalism: How Breaking News Got Broken and 5 Things You Need to Do Now